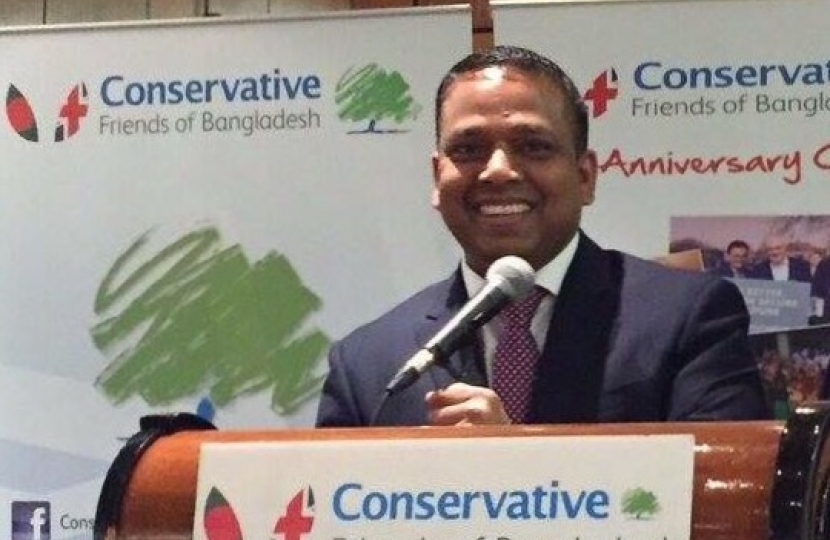 Since the founding of Conservative Friends of Bangladesh 13 years ago, I have led 5 visits to Bangladesh with Conservative Parliamentarians and activists. Our project, Shapla (named after the national flower of Bangladesh) which builds bridges between the UK and Bangladesh on economic, political and social fronts has been privileged to have had Cabinet Ministers feature. There are over 750,000 British Bangladeshis in the UK, all strive and want to see the bilateral relationship and the Commonwealth further flourish post Brexit. They want a balanced immigration system that is considerate of the skills that Bangladeshi’s can bring to Britain. From our expert chefs who form the backbone of the British curry industry (a sector turning over £4.2b a year) to our ICT specialists, we can inject life into our high streets and technology with a more tuned system. That is why our visit to Bangladesh in September 2019 had more of a Global Britain theme than ever. Our delegates met global business leaders, visited British Investment projects to hear their journey, and we equally returned to the camps in Cox’s Bazaar as well as visiting a range of good health, education and sport projects supported by BRAC, London Tigers and Age International. We also took part in a river clean-up project on the banks of the Surma in Sylhet. Our delegates also called on the Prime Minister of Bangladesh, other senior Government Ministers and the Opposition to strengthen further the political relationship. Bangladesh is a young country which will celebrate its 50th anniversary in 2021. Bangladesh is the 8th most populous country in the world with a population that is well over 165 Million and over 30 million middle – affluent class people. The country is bordered by Burma, India and Nepal. Bangladesh is considered to be among the next eleven emerging economies in the world. In fact, last year, HSBC predicted that Bangladesh would be the 26th largest economy in the world by 2030. The economy has steadily grown in the past decade. The economy grew 8.13 % last year which is unparalleled in the Asian sub-continent. According to International Monetary Fund, Bangladesh is currently the second fastest growing economy in Asia. The UK is the third largest export destination of Bangladesh. From Unilever to H&M, Next, Primark and Marks & Spencer – there is an enormous presence of UK companies in Bangladesh. The very clothes we are buying on Oxford Street and in Westfield have made a journey from a country that is rapidly on the ascent. And so, when the British government shows concern and compassion, it is noticed. To Bangladeshi eyes alert to the superpowers sharing a stake in its growth, the UK is no smash and grab customer. The other products being exported to the UK include frozen food that can be brought from our high street superstores, IT freelancing and engineering, leather and jute products. Bangladesh has recently expanded its export products across the world and gone beyond manufacturing garments to high-end products such as pharmaceutical, industrial robots, ships, electrical and electronic products. The Bangladesh market is particularly price sensitive with very low-price products from neighbouring countries such as China and India controlling many sectors but there is still a massive potential for British products to enter Bangladesh because of its quality and the fact that it’s made in the UK. Bangladesh offers promising opportunities for UK Investment, products and services, particularly in the energy, pharmaceutical, education, hotel and tourism, waste management, railway & infrastructure and ICT & telecommunication sectors. Both the UK and Bangladesh already enjoy close ties but falls short of its hugh potential. There is untapped potential between the two economies and to strengthen further the existing bi-lateral trade relationship, the UK and Bangladesh Government should undertake a feasibility study into the trade and investment opportunities, revisit its priorities and find a solution to overcome any trade barriers between the two countries. This will be a great opportunity for UK to promote Global Britain and make a vital difference to the economic fortunes of both the UK and Bangladesh post-Brexit. Bangladesh’s place in the South East Asia is shifting not just economically but in status, aspiration and its role globally. The UK Government needs to adjust its strategy to Bangladesh’s enhanced economic growth, engage with thriving Bangladesh and pave way for British companies and products to Bangladesh’s over 165 million consumers.