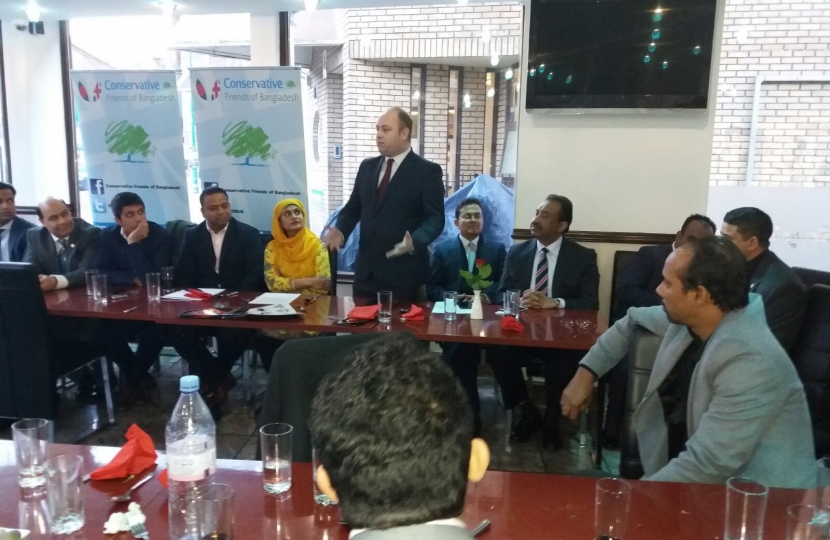 The Conservative Friends of Bangladesh (CFoB) will be hosting its 10 Year Anniversary Dinner in London on Monday 5th December 2016. The gala reception will be attended by Hon President Anne Main MP with 174 guests. CFoB Patron, Nicky Morgan MP and Conservative Party Chairman, Patrick McLoughlin will be present, acknowledging the role of the British Bangladeshi contribution to society and the economy, during the evening.

A press conference will be held in advance on Tuesday 29th November 2016, at Shaad Grill, Brick Lane, highlighting the aims of the celebration, outline the entertainment, prestigious awards and itinerary. The Bangladeshi press are invited. CFoB intends to promote the successful achievements of the British Bangladeshi community and its supporters. CFoB Chairman, Mehfuz Ahmed will brief the press with David Mackintosh MP.

Anne Main MP commented, “it has given me great pleasure being a part of the Conservative Friends of Bangladesh for 10 years.  As its president, and the chair of the All-Party Parliamentary Group on Bangladesh, I am especially proud of the hard work that has gone into growing the group’s success.  This occasion speaks to the strong bonds between the British Bangladeshi community and the Conservative Party, which CFoB has done more than any to foster.”

Nicky Morgan MP commented, “As Patron of the Conservative Friends of Bangladesh (CFoB),

I have had the pleasure of working with CFoB since I was first elected in 2010 and it has been fantastic to see how much the group has grown in size and influence over the past 6 years.”

Mehfuz Ahmed commented, “we have invited the Bangla press to join us in advance of the 10-year anniversary dinner to celebrate our successes, share the work undertaken by CFoB internationally and for the UK.”