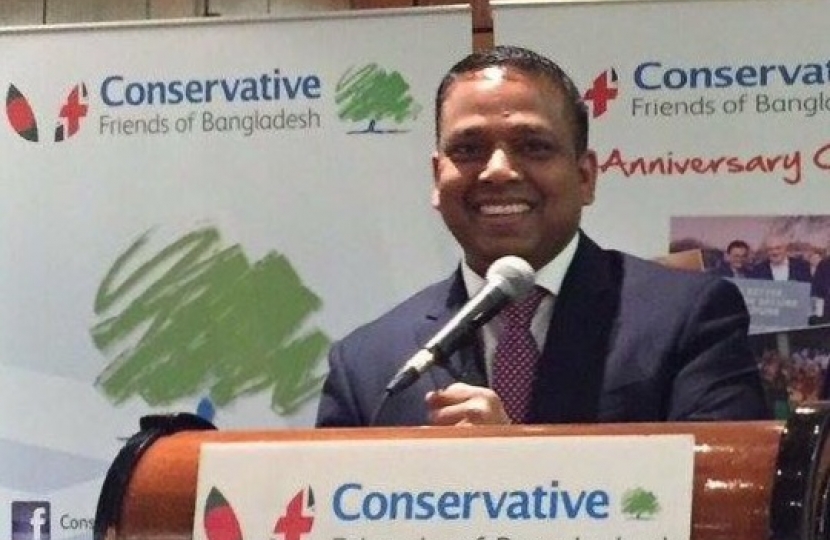 Mehfuz Ahmed is the Chairman of Conservatives Friends of Bangladesh (CFoB) and a long standing member of the Conservative Party.

Mehfuz made political history by becoming the first ever Conservative Councillor in 108 years by winning an outstanding victory against the opposition in Westminster City Council in July 2008. In May 2009, Mehfuz was quickly promoted to Deputy Cabinet Member for Children and Young People Services. He has held numerous positions in Conservative Association's for many years and a passionate campaigner. Mehfuz was the election agent for Brent Central for both the local elections in 2014 and the General Election 2015 & 2017, and served as the Chairman of Brent Conservative Association for a number of years.

Mehfuz founded Project Shapla an International Social Action Project. Since 2011, he has successfully led the CFoB's International Social Action Projects with Conservative party volunteers and Parliamentarians to Bangladesh. He built relationships, awareness and campaigns with the Conservative Party and Bangladeshi parliamentarians through community development, sports and young people programmes.

In 2017, Mehfuz secured the first visit of Conservative MPs and Conservative Party volunteers to the Rohingya refugee camps in Cox’s Bazaar as part of their social action - Project Shapla. The Conservative MPs were the first British politicians to visit the refugee camps, they were accompanied by UNHCR and Bangladesh Government officials. The visit was the strongest piece of work that put the Conservative MPs in a position to call a debate in the House of Commons on the crisis and ensured the international aid and support to both charities on the ground and Bangladesh Government was increased. The MPs and delegates continue to raise this issue in Parliament and with the Government.

Outside the world of politics, Mehfuz passion continues for the communities he serves, as CEO of an Older People's Charity in Westminster. Mehfuz has been involved with voluntary and public sector for over 25 years as Trustee of various charities and a Founding Trustee of London Tigers. He has served as a parent & local authority governor for a number of primary, secondary and adult educational bodies and continues to take a keen interest in Education, Older People's issues and International Development.